Studio Job MAD HOUSE, the Museum of Art and Design’s latest exhibit, presents the creative vision of design collaborators Job Smeets and Nynke Tynagel, who founded the Belgium-based atelier Studio Job in 1998. The immersive design experience pulls inspiration from both collaborators’ Belgian and Dutch origins and represents a unique spin on the intersection of design and cultural identity.
MAD and The Consulate General of the Netherlands in New York, which helped support the MAD exhibit, are vital partners for WantedDesign. The Consulate General of the Netherlands in New York as part of the Dutch Culture USA program is supporting the launch at WantedDesign Manhattan of “Ventura New York. The Dutch Project”, curated by Ventura Projects. The exhibit will present what Dutch design looks like in 2016 and how the nation’s culture has shaped its creative legacy.

Studio Job MAD HOUSE curator Ron Labaco talked with WantedDesign about the MAD exhibit, the evolution of a Dutch design identity, and the importance of great craftsmanship. More

WantedDesign: How was the process of envisioning and building this exhibit?

Ron Labaco: The project began just a little over a year ago when I saw [Studio Job’s] amazing body of work from the Landmark and Aftermath series in the Carpenters Workshop Gallery booth at Design Miami in 2014. I had visited Studio Job House in 2011 and met them at a dinner organized by Chamber earlier in 2014, so there had been other points of prior contact.

After an initial meeting with Job at MAD, it became clear that he and Nynke had definite ideas about the selection and presentation of their work in a museum setting. Their proposal was a departure from the standard, chronologically-organized museum retrospective. Instead they suggested an installation that juxtaposed work from different dates to draw comparisons and contrasts. Pressing them further, they explained that it was how they imagined the home of their dream collector.

I found this concept of a self-generated interior in a museum setting to be a compelling narrative and one that followed the trajectory in their career of self-curated and designed installations, such as Studio Job Gallery, Studio Job House, Studio Job Wunderkammer, and others. Essentially what developed was a series of “period rooms,” as one would find in the decorative arts galleries of the Met or the Brooklyn Museum. But, in this case, it was curated and designed by the designers themselves around their own body of work as a “gesamtkunstwerk,” which roughly translates as “total work of art” or “comprehensive artwork.”

The pieces are organized loosely around the idea of domestic and private settings, such as a gentleman’s smoking room or a chapel, but not rigidly so. For example, instead of a bedroom, one grouping relates to love and lust. To complete the experience as a non-museum space, Nynke’s grayscale brick-patterned wallpaper and weathered oak parquet-patterned floorcovering complete the setting for this fictional collector’s house at MAD. This play of pattern and scale in the exhibition also makes me think of a funhouse, in which one’s visual and psychological perceptions and expectations are challenged in an amusing manner.

RL: Studio Job has created a distinctive body of work with such high production value that it fetishizes the idea of hand-craftsmanship. Though they use materials and fabrication methods normally associated with traditional luxury production, their work is absolutely contemporary. They have also successfully extended the postmodernism into the 21st century, although not necessarily by intent.

WD: They are questioning the frontier between Art and Design. Where do you think their work and their approach stands?

RL: Although they like to question whether their work should be considered art or design—and then summarily dismiss the idea—they have always asserted that they are designers. 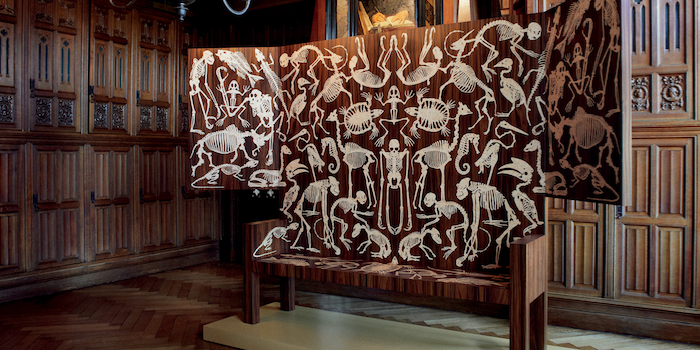 WD: They collaborate with talented artisans to produce most of their pieces. Which one of the pieces is the most challenging technically?

RL: I think that all of their work is challenging to produce because of their extraordinary commitment to high-quality craftsmanship, which is labor intensive. They seek to employ the most talented artisans with different skills at their atelier in Belgium, but the studio adapts and evolves according to the talent that is available. In his lecture at MAD, Job related the story of the artisan who did their stained-glass work, but who is now retired. Consequently, it is unlikely that they will be producing any more stained-glass pieces.

WD: Studio Job’s work is narrative, graphic, and often provocative. It also refers to religion quite often. Can we talk about a Dutch design identity?

RL: The sense of humor and quirkiness inherent in most of their work—even when they are dealing with dark, serious subject matter—is something that I associate with Dutch design. Unfortunately, the modernism dictum is that one cannot take work seriously if it incorporates humor or pattern or color for that matter. Not to mention all three at once. Although technically Job is Belgian and Nynke is Dutch, they both graduated from the Design Academy Eindhoven in the Netherlands, so the association with the work coming out of that university comes naturally. Historically, Belgian design has been characterized as elegant and luxurious, and Dutch design as simple, humorous, and conceptual. In Studio Job, you have a hybrid of these two worlds.

WD: Can you tell us a bit more about current Dutch design culture?

RL: In 2006 MAD exhibited Simply Droog, which celebrated over a decade of the Dutch collective’s creativity since its establishment in 1993. The work was organized in categories that we have come to associate with contemporary Dutch design, such as ecological awareness, repurposing materials, DIY, sociopolitical commentary, ornament, simplicity, irony, and humor. From the post-Droog generation, technology-driven and conceptual work are two modes of exploration that are of interest to me. Designers such as Joris Laarman and Iris van Herpen combine cutting edge technology and scientific research to envision our possible future. On the other side of the spectrum, Studio Job’s conceptual approach delves into our collective unconscious to evoke innate responses and reflect upon the human condition.

Studio Job The Mad House is on view at the Museum of Art and Design, until August 21, 2016.