Transatlantic Creative Exchange is presented by the Cultural Services of the French Embassy and WantedDesign, part of the Oui Design initiative supported by Institut Français-Paris, the French Ministry of Culture and Communication, and the Florence Gould Foundation.

The Transatlantic Creative Exchange project will unfold between May 2016 and May 2017. A total of 10 French-American pairings are created, based on mutual interest to collaborate on a project. The goal is that both designers and manufacturers experiment and explore new territories together, thanks to the designers’ creativity and vision combined with manufacturers and artisans unique expertise and cultural background. The exhibition at WantedDesign Brooklyn will showcase prototypes and unique pieces resulting from the collaborations between the French and American designers and manufacturers. The participants come from all around both countries, offering an interesting way to discover different regions of France and the U.S. though their creative backgrounds.

“As French-New Yorkers, promoting French creativity and Savoir Faire and initiating French-American collaborations has been a dear and important mission for us since the beginning of WantedDesign. The OUI design program is a key initiative that we are thrilled to support and to be part of,” said WantedDesign Founders Odile Hainaut and Claire Pijoulat. “The ‘Transatlantic Creative Exchange’ is a unique opportunity for French manufacturers to discover the new generation of American designers, who may not be as well known in France. And for the designers, it’s a chance to experiment, think outside of the box, bring a new vision and new ideas to life without commercial constraints. It’s exciting for the manufacturers as well, to be able to push boundaries and develop extraordinary pieces that highlight their expertise. And it’s an amazing opportunity to share with the WantedDesign audience the magic behind the making of a beautiful object”.

The designers and manufacturers were invited to start a conversation and to share ideas to define the scope of the project. Each pair then defined a method of approach, sometimes including a “design in residency” time. Each group also had the responsibility to document their project from beginning to end, so part of the exhibition will show not only their prototype but also the story of the creative and manufacturing process. The dialogue between the French and American partners throughout the development is as valuable as the resulting pieces. A second chapter of the program will be presented at WantedDesign Brooklyn in 2017, and the entire exhibition will be presented in Paris. Pairings for 2017 and information about the exhibit in Paris will be announced this May.

The first presentation of the “Transatlantic Creative Exchange” this May will include five French-American duos: 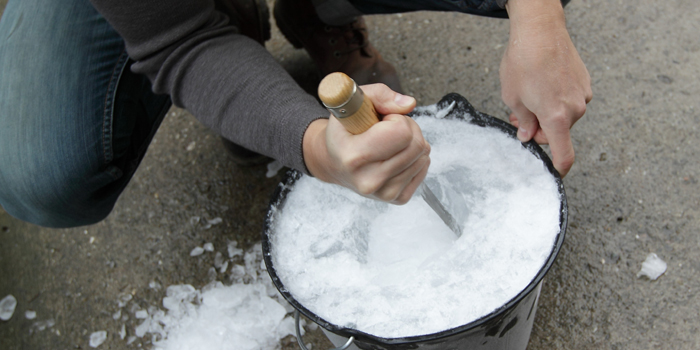 Ice and Glass: Two materials that seem naturally opposed.
Glass morphs slowly into a solid as it cools from its liquid hot form. Water in extreme cold temperatures transforms into ice. These two materials respond in equal yet opposite ways to the elements, seeming at first sight like nothing unites them. Designer Steven Haulenbeek envisioned something greater between the two, and found with CIAV the perfect partner to explore the idea.

The idea was to use different forms of ice to create a mold in which to blow the glass, using the melting of the frozen water to create a distinctive finish on the surface of the final object.
“My goal was to introduce ice or extreme cold into the typically fiery hot process of glass blowing. Some of the experiments included blowing glass into frozen molds, snow filled molds, solid carved ice molds as well as injecting freezing cold water into the inside of a red hot blown vessel,” explained Steven Haulenbeek. “The results were very compelling. We developed two new processes to create blown glass objects and hope to continue to create both in either limited edition or unlimited production.”

The product and its esthetic wasn’t the ultimate goal for Haulenbeek, but it was much more about the experimental process of uniting these two disparate elements. The resulting collection embodies this beautiful story of collaboration and organic process in partnership with the International Glass Art Center (CIAV) in Meisenthal, France.
“It is rare to find a company who is willing to step so far outside of the box of the typical production processes. The CIAV in Meisenthal didn’t even take an ounce of convincing. In fact, they not only supported my unconventional ice-blowing concepts, they went ahead and purchased a freezer for me to work with during my stay. There was a spirit of creative exploration and discovery during my time in Meisenthal which led to an exciting and fruitful collaboration,” said Haulenbeek. 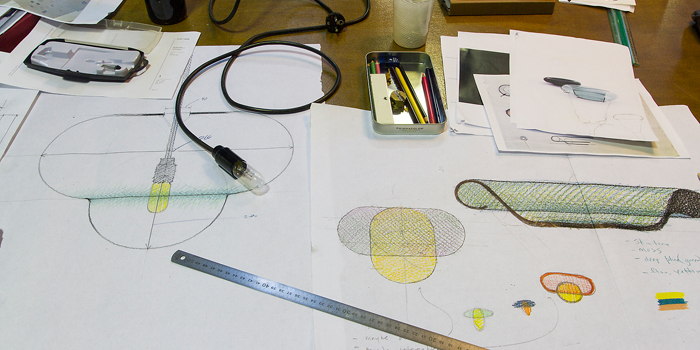 Jonah Takagi was invited by the Cirva and WantedDesign to participate in the American Creative Exchange program set up by the Cultural Services of the French Embassy in New York. The frame of work granted by the Cirva is a real challenge: to realize in a single week, with the technicians of the Cirva, the prototype of an object that will be shown in preview a few weeks later during the WantedDesign event .

In response to these specifications, Jonah Takagi first translated his ideas in multiple preparatory drawings. The principles he implemented for the Cirva revolve around simple shapes that come to nest inside each other in order to reveal the subtleties of colors and effects of glass.

Two types of objects were selected: the lamp consisting of two elements gathered together to play on transparency, and a series of very simple containers that refer to the archaic utilitarian glass pieces of Ancient Rome.
In both cases, the attention to detail and the classic elegance of the silhouette are emphasized.
The general atmosphere of the project focuses on nuances and natural movements: the gradient colors of the sky that meets the horizon, changes in mountain landscapes, aquatic vibrations of a pond at dawn. 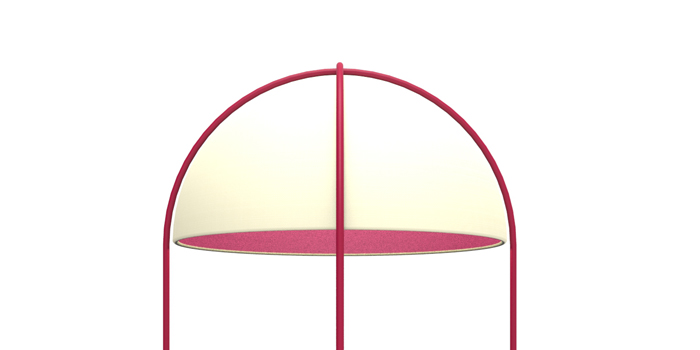 Ligne Roset and Marc Thorpe are a natural fit and a great opportunity to start a collaboration.
All the steps of the design process will be documented, from drawing, to material selection and prototype creation, as it emphasizes the importance of the relationships, including trust and communication, between a designer and a manufacturer.

“The relationship between transatlantic designer and manufacturer is like working together on the same road but at a different times,” said Thorpe.”And the key to arriving at the end together, while working so far apart, is trust that the other partner will receive, understand and bring your idea to life”.
Vol de nuit is a circular and domed community seating concept that incorporates upholstery, lighting and structural elements into one statement piece. Thorpe is very interested in architecture within architecture and creating an intimate space within a larger space, which is translated perfectly in the freestanding Vol de Nuit piece.
The name of this design has two meanings in this case. First it is the title of a novel of French writer and aviator Antoine de Saint- Exupéry, born in the same region than Ligne Roset headquaters. Second, “Vol de Nuit”, French for “night flight”, signifie the origin of the idea. Thorpe came up and drew the concept on an overnight plane trip.
“Marc brought us something that doesn’t currently exist in Ligne Roset line and we are very excited to create it”, said Antoine Roset, Vice President of Ligne Roset. “An important part of this project has been clear communication and with that we have been able to push the technology into not only a new shape, but a new way of sitting for our clients”. 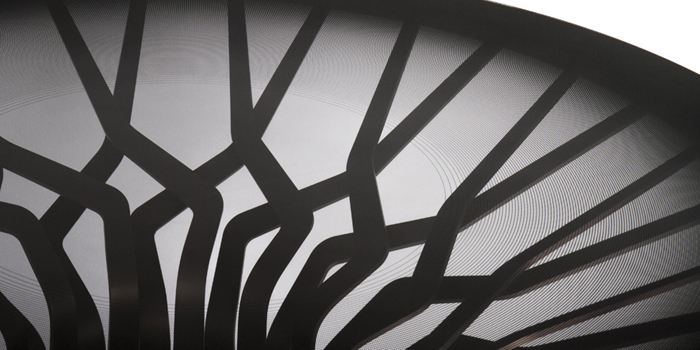 The collaboration is born from an encounter in New York 2 years ago between 2 personalities, designer Noe Duchaufour Lawrance and Neal Feay creative force Alex Rasmussen, both highly inspired by two natural elements, the mangrove tree and aluminium.

The Mangrove Table, fabricated by Neal Feay, a global leader in creative aluminium company,  honors its namesake with an arbor-like base rising to nestle a smoky, layered etched glass surface.
Duchaufour Lawrance’s design elegantly interprets the species nearly infinite variety. Rasmussen’s precision aluminum craftsmanship is pure wizardry.
Thirty anodized aluminum legs in equally distributed pairings of left and right huddle around two core rings and a ballast.  Elementally simple.  Ultimately complex.  Anodized aluminum hues in seemingly aromatic tones.
This Paris – Santa Barbara pairing is perfection: the City of Lights and high design with the California beach town blessed by a tech touch.  Both men have backgrounds deep in their respective arts.  Noé is following in the inspirational footsteps of his father’s sculpting career.  Alex is the third generation to head the Neal Feay Company combining decades of precision aluminum anodizing and manufacturing with leading edge computer technology.
In 2015 Noé Duchaufour Lawrance and Alex Rasmussen were invited presenters at the pre-eminent Cabinet de Curiosités de Thomas Erber in Paris. A new prototype has been developed for the Transatlantic Creative Exchange exhibit . 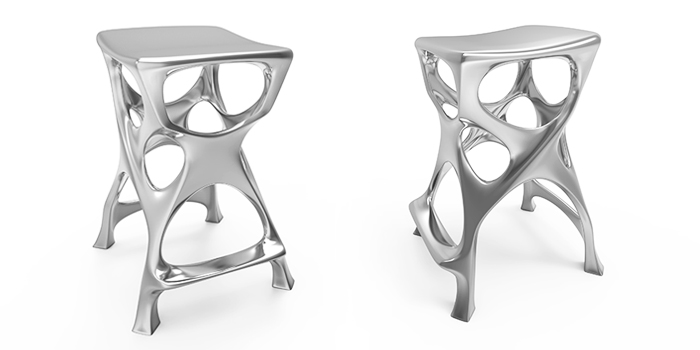 The idea of the Micah stool is born from a special request for the Oasis Harmony of the Seas, the largest cruise ship ever built in history, set to come out of the French St. Nazaire shipyard STX in May 2016. The venue begged for a mecha / droid like set of metal stools as a finishing touch to surround the robotic bartending area of the Bionic bar. The Micah stool is a complex form, and the production of the piece at a custom height in record time was a great challenge. To make things happen, RCCL and the French shipyard STX put the designer in contact with French design editor TABISSO who’s main focus is the production of high end furniture for the professional/Contract market. Together, they decided to cast Micah in aluminum via leading edge technology: 3d printing of sand molds to cast in one solid piece. There are but a few companies today using this technology, usually for the automotive and the aerospace industries, mainly in France and Germany. This project is among the first to use the technology for design furniture pieces. The resulting Micah stool is as beautiful and uncompromising as it was originally conceived. The sculptural, skeleton-like design of the stools and aluminum material is a perfect match with the futuristic Bionic Bar. They will be only a series of 12 stools produced for the cruise ship, and a special unique piece for the Transatlantic Creative Exchange. As not specially commissioned for the exhibit, this French-American collaboration and the symbolic message of the ship being made in France and soon to cross the Atlantic for the US is a perfect example of a successful collaboration for an exceptional piece.

The Cultural Services of the French Embassy in the United States launched Oui Design, a multifaceted program to foster creative exchange in design between France and the U.S. By partnering with individuals and institutions on both sides of the Atlantic, Oui Design supports and initiates creative collaborations with designers, artisans, curators, inventors, researchers, teachers, students, and manufacturers. It also brings French designers to the U.S. to exhibit their works, and engage with industry professionals and the public. In so doing, the program aims to enhance the economic and creative aspects of the design industry in both countries.

Supported by Institut Français-Paris, the French Ministry of Culture and Communication, and the Florence Gould Foundation, Oui Design will consist of exhibitions, talks, workshops, debates, residencies, and more in New York in 2016 and 2017. Meanwhile, additional projects and events will take place in Boston, Chicago, and Miami. The program will offer U.S. audiences a context in which to discover and exchange with some of the most important designers and professionals in France today.

The Cultural Services of the French Embassy promotes the best of French arts, literature, cinema, digital innovation, language, and higher education across the US. Based in New York City, Washington D.C., and eight other cities across the country, the Cultural Services brings artists, authors, intellectuals and innovators to cities nationwide. It also builds partnerships between French and American artists, institutions, and universities on both sides of the Atlantic. In New York, through its bookshop Albertine, it fosters French-American exchange around literature and the arts.