Winnipeg Outside the Box

Table for 4 brings together four makers from Winnipeg.

Geographically isolated in the heart of the continent, our city is both contextually challenging and creatively charged, recognized as much for its extreme winters as it is for its thriving arts and culture scene. The work included in this exhibition represents a new generation of independent designers who share an affinity for carefully crafted objects with an enduring tactile and material presence that is drawn from the local vernacular.

As curators, 5468796 Architecture has reinvented the standard Bankers box as a flexible framework that is able to either contain or display the work, depending on how it is configured. The box was fabricated by Perimeter Industries, a local corrugated packaging manufacturer. 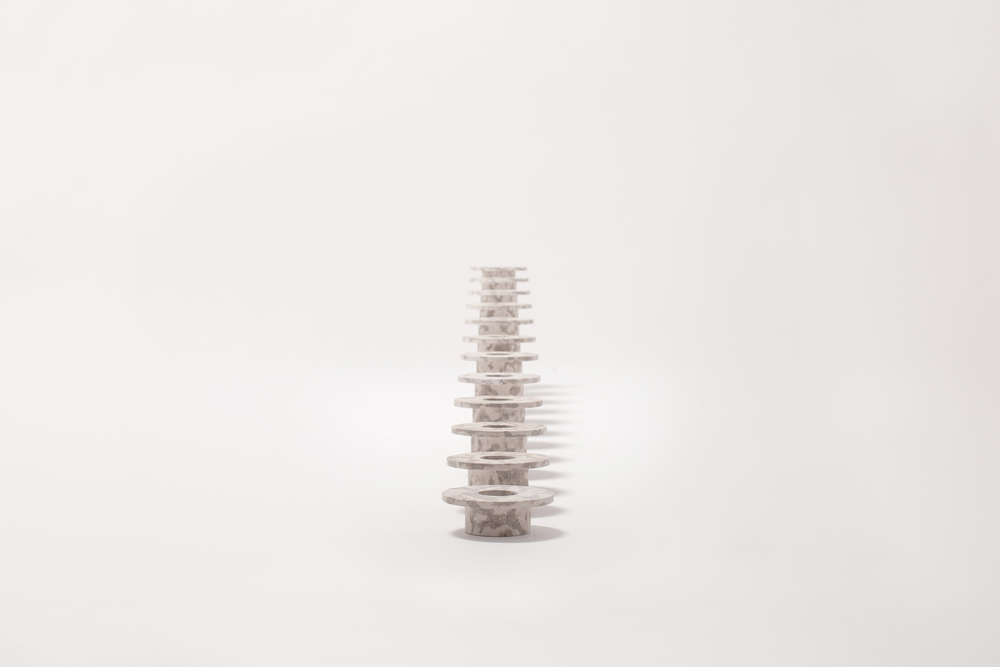 5468796 Architecture is a Winnipeg-based design studio established in 2007. Working around a single table, the office unites the diverse knowledge and experience of twelve young professionals. Together, they believe that every client, user and civic environment – regardless of budget – deserves an outcome that advances architecture.

Recent firm recognitions include the Rice Design Alliance Spotlight Award, the RAIC Emerging Architectural Practice Award and the WAN 21 for 21 Award, an international prize whose aim is to highlight 21 architects who could be the leading lights of architecture in the 21st century.

Thom Fougere is a Canadian designer focused on exploring the relationship between objects, products, spaces and dwelling. Thom Fougere’s studio was founded with a focus on furniture design, but continues to have a strong connection with product design, and architecture. Fougere’s work is heavily influenced by Winnipeg Manitoba, a small peculiar city in the middle of Canada where he calls home. The influence from his surroundings is evident in examining his work, which speaks to the prairie vernacular.

The Tyndall Vessel Collection lends itself to creative interpretations with an open-ended function, purposefully left undefined. Envisioned to exist as a cluster of 12, each form interacts with the next to create interesting staging opportunities. The shifting sequence of forms, ranging from 33cm at the highest point and 5cm at the lowest, create exciting opportunities for presenting clusters in playful configurations.  Each Tyndall Vessel is original with its own texture and veining pattern. Over time each vessel will develop a unique patina intensifying the character of each piece.

Tyndall stone is a type of limestone that is quarried exclusively in Manitoba, Canada. A porous light stone, Tyndall stone has an intricate grey veining pattern that courses through each slab. The dark veining within the stone (dolomite), is dense and performs a similar function that rebar does for concrete – bonding with the porous light stone to keep the structural integrity of the material. The dolomite portion of Tyndall stone was created by the burrowing of ancient marine creatures within the deposited limestone bed. The evidence of their existence can be found on the face of each slab of Tyndall stone. The light more porous stone that exists between the dolomite deposits is highly reactive to naturally occurring acids. These acids which often interact with the stone through a prolonged period of daily use will leave traces and inform portions of this porous material. As Tyndall stone is only quarried in Manitoba it is common among the Prairie Provinces to see many, if not most, civic structures clad in the stone. Favoured by many architects and builders at the turn of the century for its durability and resilient dynamic beauty.

mud + stone pottery is the Winnipeg based collaboration of the creative ceramic works of two artists: Jenn McCurry and Lynne Mulvihill. Potters with the desire to create functional, beautiful and unique pieces for the once in a lifetime event to the everyday cup of coffee.

Using Canadian clays, they design and create an array of handbuilt and thrown pieces. Each piece is made and bisque fired at the studio, then glazed before the final gas firing which takes place offsite. Inspiration comes from a variety of sources and the two make prototypes, refine and edit each line created considering the details. From how the object feels in your hand, against your lips, to how it reads aesthetically when in use and when sitting on the table or counter. Lynne has a background in design with a degree in architecture, and Jenn was trained as a silversmith. Both artists bring a different skill set and eye to each finished item.

Jenn and Lynne both have a live/work situation, with a small gallery set up at their Riverview location where the public is invited into their workspace to see the process first hand. mud + stone is focused on a combination of production and custom pottery. The duo has designed and created lines of wares for some local shops and some of the top local restaurants including deer + almond, RAW:almond, Sydney’s and more.

The thumbprint series of mugs evolved as a result of watching how people hold and interact with their mug. The result is a vessel that can be held in multiple ways with the handle being offset to allow for a comfortable two handed grip. The dent allows for a single hand hold and provides a rest for the thumb when holding the cup by the base. Made in porcelain with lead free glazes.

Alana MacDougall (BFA, MFA Candidate) is an artist from Winnipeg, Manitoba currently working in Brooklyn, New York. She has built her artistic practice around both drawing and ceramic arts and strives to create works where these two practices can successfully intersect. She is interested in the ritual function of ceramic works in our every day lives and in creating and documenting the objects with which we surround ourselves.

First Apartment explores the idea of “nesting” in both the figurative and literal sense though the surface treatment and form of a set of serving bowls. We make our homes our own through the objects and surroundings we consciously or subconsciously curate out of love or necessity. This particular piece is a portrait of sorts describing her sister’s first experience living in her own space in a new city. The objects depicted were observed in her apartment and were either of her choosing or collected out of necessity as she built her new life and nest. These works are hand thrown in porcelain on the potter’s wheel to nest inside one another and are surfaced with uniquely rendered underglaze drawings.

Hare and Hare is the creative outgrowth of Jason and Karen Hare.

As partners in both life and work, they design with the intention to honour material, time, practice and place. They combine the uses of handwork with forms of digital fabrication to bridge the gap between art and industry, finding viable ways to create meaningful objects.

Their relationship is one built on balance and trust; their design work weighs control with the art of letting go. It is not without the enduring influence of the landscape and climate that their designs manifest themselves in the physical realm. They become by way of emerging and dissolving, their process, using time as elemental practice. The objects they create are inspired by material and materialized through curiosity and play.

Burly Bowls: once standing on the streets of Winnipeg, these three little bowls have been formed to best reveal the swirling and speckled grains found uniquely in burl.