During the Archtober month, WantedDesign is pleased to celebrate the opening of the third edition of the WOOD MOOD exhibition at the Valcucine showroom in Soho, 66 Crosby Street, New York, on Thursday October 30 at 6-9 pm. For the event, WantedDesign and Valcucine will present a special conversation moderated by Paul Clemence, Contributing Editor for Metropolis Magazine, with Andrew H. Dent Ph.D., Vice President, Library & Materials Research at Material ConneXion, Winka Dubbeldam, Founder and Principal of archi-tectonics, Daniele Prosdocimo, Communication Director at Valcucine, and Brian Jevremov, Founder, Dom Interiors. More

Commissioned by Valcucine and curated by Italian architect Davide Fabio Colaci, the exhibition will unveil new possibilities and concepts, exploring the characteristics of wood beyond the conventional and functional.

WOOD MOOD celebrates the versatility of wood, championing designers and craftsmanship that challenge the traditional practices associated with this material, in the same way Valcucine does with its range of contemporary wooden kitchens.

The selection includes twelve objects (or series of objects), by twelve designers – Tomas Alonso, Arabeschi di Latte, Daniele Bortotto, Fabien Cappello, Fabio Castelli, Lorenzo Damiani, Giulio Iacchetti, Giovanni Longo, Naruse Inokuma architects, Luzia Vogt, Sandra Chamberlin, and Fort Standard – that reassess the concept of wood as well as the traditional practices of product design. Each object embodies and expresses the research it has been based upon and has been selected for the way it refers to key values of contemporary living.

The exhibition will be displayed using a series of large boxes that have been produced using wood panels from Valcucine’s stand at Eurocucina during Milan’s Salone 2014, in line with the company’s recyclability philosophy. The boxes will also be used to transport the pieces as they travel around the world. 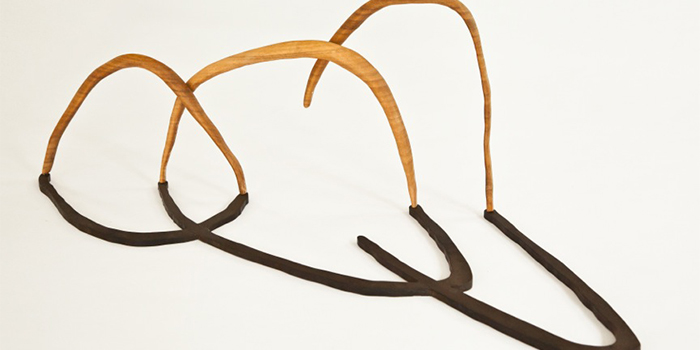 THE WEIGHT OF SHADOW, Sandra Chamberlin, 2014

The thin lines of garden borders and mountain outlines inspire a light and symbolic piece where two different essence of wood take life from a two-dimensional drawing, creating a subtle optical illusion of shadows and reflections. The fragility of the lines constitute a delicate and material landscape, where walnut and ebony wood reflect each other creating a primitive and sophisticated figure. 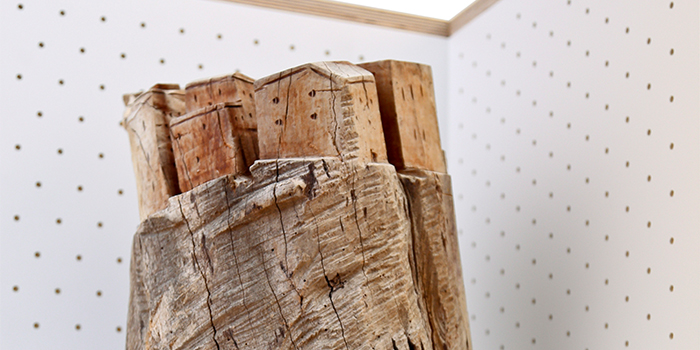 Fabio Castelli imagines continuously evolving landscapes and shapes and he does this using the recycled logs and pieces of wood that are plentiful in nature. He works by hand, using a small saw to remove parts of the wood and to cut, mould and carve in a single direction. The result consists in live, perhaps out-of-scale, locations that offer renewed vitality to the soul of wood, as if the artist were actually participating in the foundation of a new city. His inhabited landscapes are full of the fascination of matter; they change with time and with the atmosphere and are inhabited by men and populated by insects. They are at once primitive and magical places that plunge you into a new reality. 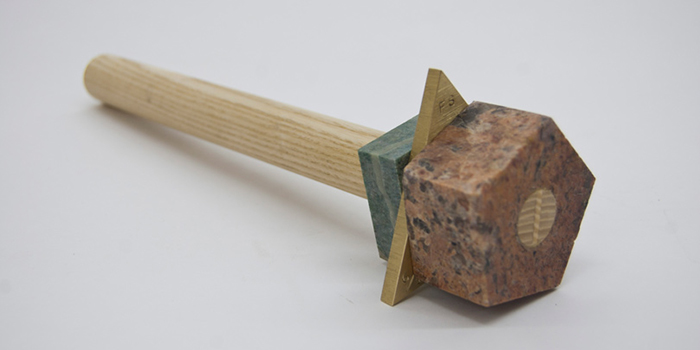 Threat is a provocative and blunt object and at the same time, a harmonious combination of materials and simple geometry. The traditional shape of the hammer is reinterpreted in a poetic and nonconventional way through the use of sharp metal shapes and colored marbles. The wood handle is transformed in a strong and symbolic vertical sign that, as an obelisk, rests on a precious base. 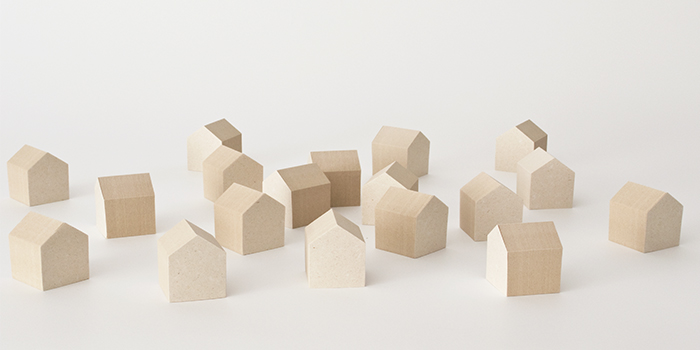 The architects Jun Inokuma and Yuri Naruse imagine small houses for a new, inhabited world. By recycling wood retrieved from the demolition of old homes, the two designers transform this wood into paper and the paper into thin sheets of note paper for everyday use. There is no difference between the construction of a small village on one’s desk and the recycling of buildings in a large city. IE-Tag offers a small gesture, that becomes an aesthetic one thanks to its ethical nature, and recalls the deep bond existing between the small and the large scale. 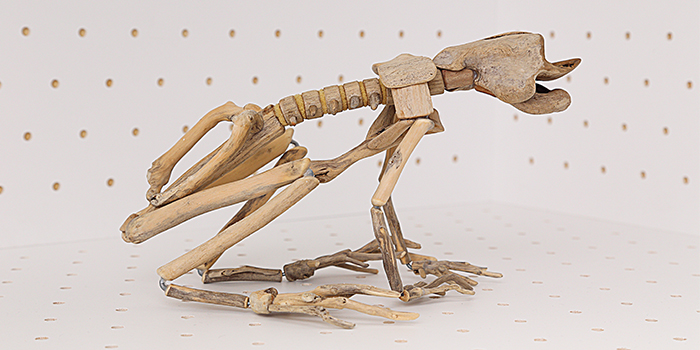 The poetry that induces Giovanni Longo to collect small pieces of wood on the beach is equal to the patience and wisdom that drive him to imagine primordial skeletons. Animal bones like fossil findings smoothed down by the water and sun come to life through a project born from design and from an untiring search for small fragments. A slow process that starts from the natural cycle of the vegetable life of branches and small pieces of wood that are slowly transformed into the signs and proof of a long-long history: theirs. 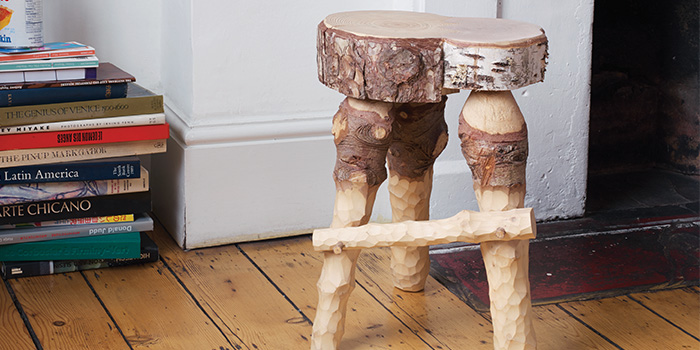 From his research into the life of Christmas trees, Fabien Cappello imagines how he can transform the wood of the Christmas trees that line the streets of London neighborhoods every January into a primary resource for new domestic furniture. For this designer, recycling is not an ethical solution to the issue of waste but a principle by which one can become integrated with the urban and cultural trends that drive the system to elaborate ways of using a tree that grows quickly but has a short life. To the extent that he has set up some temporary farms to grow trees and wood in abandoned areas of the city. 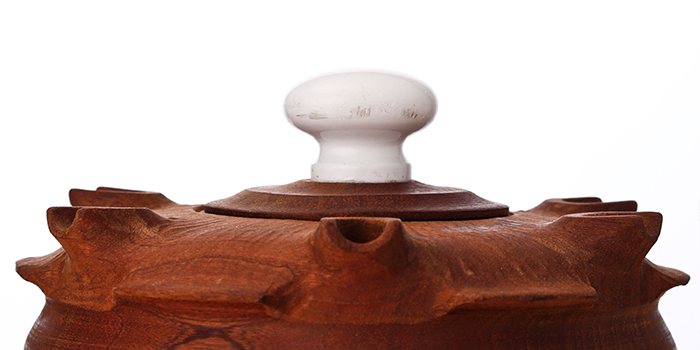 The friendship cup is a traditional object from the Aosta Valley, a region in the north of Italy. It consists in a carved wood cup with a set of small spouts used to drink coffee from with others. It is symbolic of sharing and represents a ritual that draws relatives and strangers closer together. The power expressed by carved wood and its ability to resist to heat become the symbol of an unexpected, contemporary sociality that is nevertheless deeply rooted in the tradition and culture of a people. Arabeschi di Latte chooses to make a hybrid of it, making it visible and underlining its ability to communicate a collective ritual by means of its symbolism.