The Transatlantic Creative Exchange is one of the major exhibits of Oui Design. This program, was initiated in 2016 by the Cultural Services of the French Embassy to share the French creativity and savoir-faire with the US and strengthen creative ties and collaboration in the various fields of design. The five participating French-American duos are selected based on overlapping interests, geographic diversity and desire to engage in creative collaboration. The goal of Transatlantic Creative Exchange is to push both designer and manufacturer to shift paradigms, explore technique and innovate boldly as a unified transatlantic design team.

Inspired by the glassblowing technique of cane working displayed at the Glass Lab at the Corning Museum of Glass, French designer Pauline Deltour created a series of container designs that utilized these colorful glass canes as their basis. By varying the diameter, rhythms and irregularities of the canes, a spontaneous expression was achieved. Thick, melted glass bases were shaped by hand and prepared to receive the pre-heated canes, creating a technicolor palate of containers of various shapes, sizes and thicknesses. Inspired by the juxtaposition of very thick and very thin consistencies witnessed during their collaborative glass blowing process in the workshop, vases were fashioned utilizing heavy glass bases and bubble-thin walls, conveying a beautiful, yet precarious emotion evident in its design. This duo proved to be the perfect match of creative vision and mastery of technique. The harmony of their creative process is evident in the exuberance of their designs.
cmog.org | paulinedeltour.com

“At the studio, we watched a lot of video demonstration of the glass blowing technique known as caneworking, as a means to add coloration and embed motifs into glass, I was inspired by the transference of this method and chose to explore its potential in this project’’ Pauline Deltour. 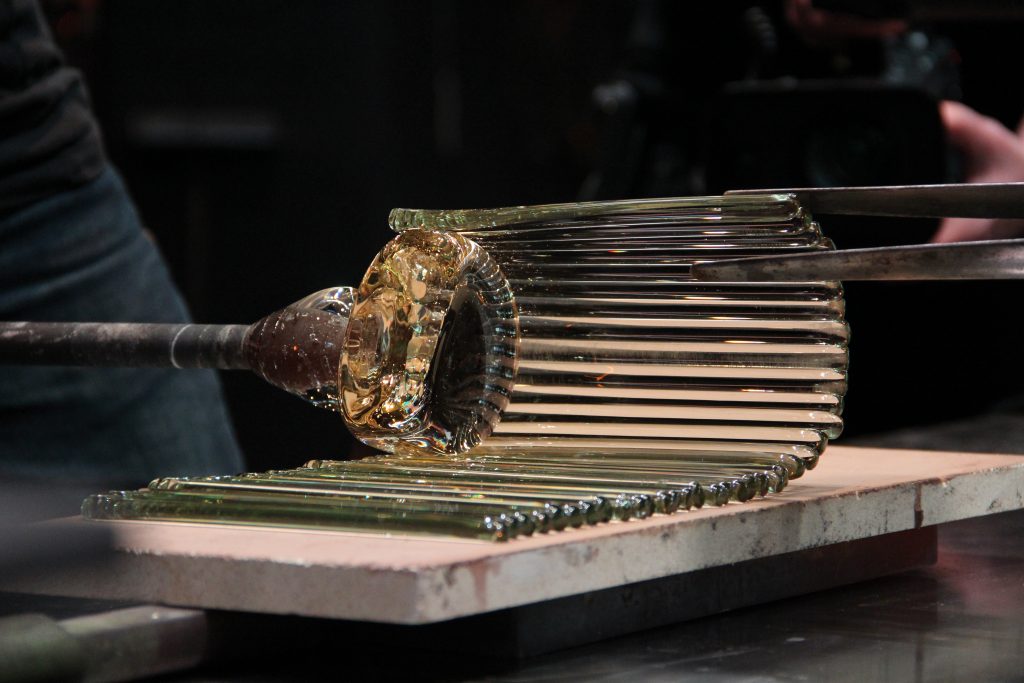 In their first ever experience collaborating with a transatlantic partner, UHURU and Constance Guisset Studio were able to merge bold organic materials, wood and cast metal in a table design that conveys softness, harmony and elegance. Achieving a successful expression through seemingly contradictory design ideals. The frankness in the language of UHURU’s design paired with the authenticity of their materials, conveys a sensation of permanence and solidity in the piece. Heavy feet, delicate curves, modular design and the beauty of carefully selected natural woods all converged to produce elegant and noble pieces that speak volumes to this duo’s collaborative ability. Thanks to UHURU’s die-cast technique and Constance’s design, the heights of the wood pieces can be adapted to the desired use and typology of table (coffee table, side table etc.). The horizontal plates that radiate from the soft base can support a diverse selection of wood table tops and offers great adaptability and versatility of use.
uhurudesign.com | constanceguisset.com

“The idea in the project, which I designed specifically for Uhuru, was to join our strengths to create a perennial collection. It was about combining organic materials, a deep yearning for softness and Uhuru’s know-how in terms of rough wood and metal techniques.” Constance Guisset. 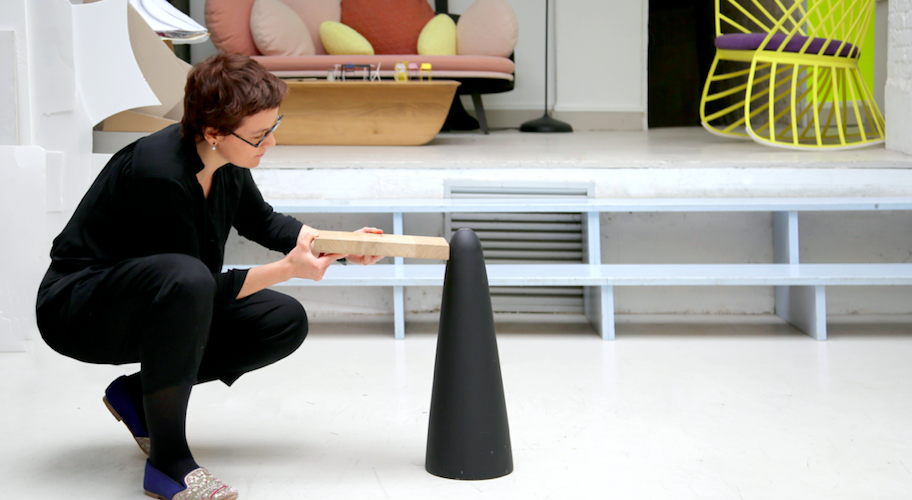 The tapestry David Weeks Studio has designed in conjunction with Pinton vividly represents a successful Transatlantic creative dialogue; it is a pristine conversation where both countries, cultures, expertise and backgrounds merge. For the studio’s design, David harkened to one of Pinton’s iconic motifs: flowers. Using that as a starting point he drew a new composition of roses, editing over them with strips of masking tape. The masking tape-as-proxy brush stroke is a technique he has carried over from his training as a painter.
This strategy informs the look and pattern of the tapestry while also dictating the texture of the weaves. David then subverted this more traditional process by hiding some of his signature animal characters within the weave, adding nuanced playfulness to the pattern. With the renderings in hand, David and the design team worked alongside the Pinton’s textile masters at a weeklong workshop hosted at their facilities in France, embracing the very same techniques preserved and developed at Ateliers Pinton for more than 150 years. Alongside the factory’s makers and artisans, David and the team explored innovative ways of bringing this new, specially conceived tapestry to fruition. The result will reveal the studio’s own culture through the extraordinary craft mastery of Ateliers Pinton.
pinton1867.com | davidweeks.com

‘’Design is so often about problem solving, but this project was more about image making. Working in two dimensions is seemingly restrictive, but if you think about it, it’s limitless; if you’re drawing something by hand, it can be whatever you want it to be and can come in as many patterns, shapes, colors or overlays as you’d like. I wanted to challenge the process, but at the same time to make something respectful to the heritage of the manufacturing at Ateliers Pinton. In this project, we’ve really appreciated that opportunity to immerse ourselves in the collaboration, and in the privilege of working in their studio. Their process is so tried and true. There’s no affectation to Ateliers Pinton’s modes of creation. Their technology has evolved but is rooted in the same methods of generations past. That sort of honesty is what we strive for at our shop in New York.’’ David Weeks 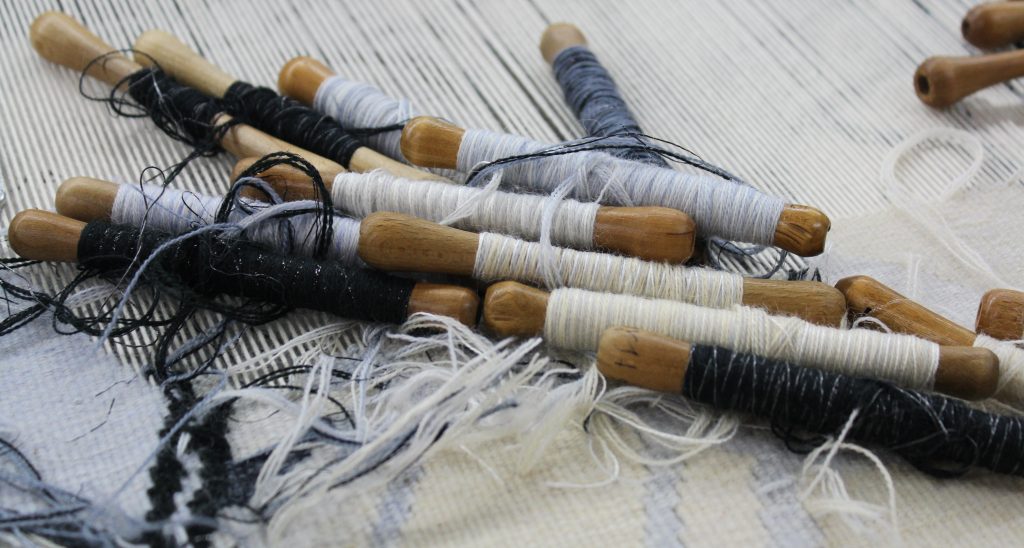 Jason Miller’s modernist-influenced style, sense of materials, and authentic expression are a natural fit with La Manufacture Cogolin. The project to be presented as part of the Transatlantic Creative Exchange highlights the unique savoir faire of the nearly hundred-year-old textile manufacture through Jason’s direct language. His chosen expression consists of a series of rugs composed of handwoven seventy-centimeter striped panels that are sewn together by hand in parallel and at right angles. The collaboration between Jason and La Manufacture Cogolin was based on expressing modern craft and design through the language of original technology. Their seamless collaboration resulted in a striking piece where simplified graphics are augmented by re-sectioning cut rug panels into complex design.
manufacturecogolin.com | jasonmiller.us

“My hope is that I can find a way to make something that feels contemporary and handmade from machinery that uses technology from the 19th century. Instead of trying to push the limits of complexity La Manufacture Cogolin looms can handle, I have radically simplified the design of the weaving. The interest will come from how the weavings are cut and sewn together. I have been looking at a lot of Navajo textiles as a reference’’ Jason Miller. 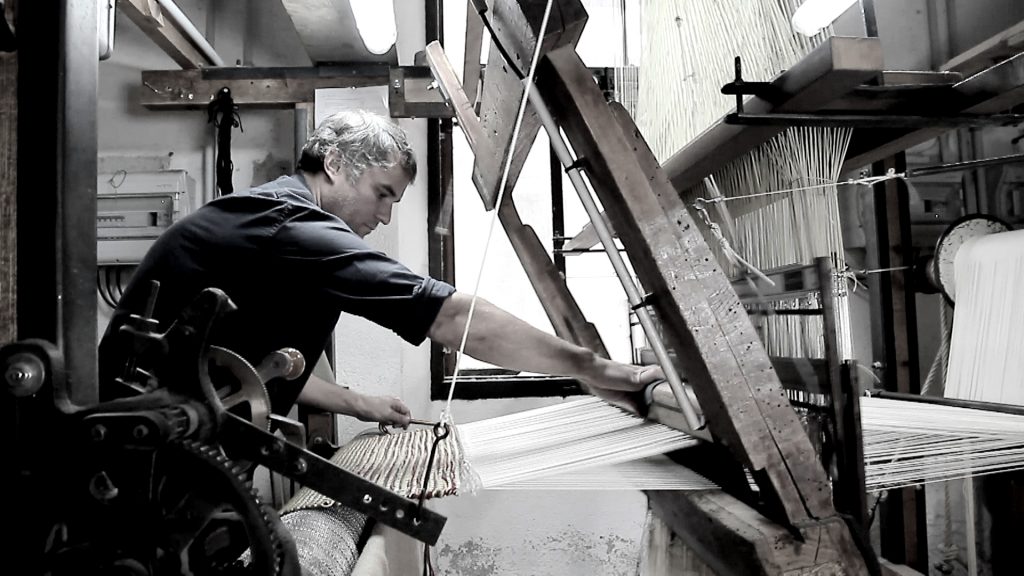 From August 2015 to March 2016, David Hughes McNabb was guest artist at cristallerie Saint-Louis at Saint-Louis-lés-Bitche, France, where he was invited to conceive a new set of works in conjunction with the Fondation d’entreprise Hermès. Mentored by the American artist Richard Fishman, DH McNabb learned about the special techniques used by artisans in the hot-and-cold working processes, applying these to artworks steeped in scientific, literary and philosophical references. How do you capture a bubble in crystal? Or a ring? Or light? These were questions and ideas he had to find answers to. Artist DH McNabb is an explorer in form. For his residency at Saint-Louis-lés-Bitche he examined the intrinsic properties of crystal, working closely with the workshop artisans. His research led to the production of a number of pieces taking pure geometric forms: Crystal Prisms, Spherical Horizons, Furnace Rings. In addition to these highly experimental pieces, McNabb wanted to pay homage to the workshop itself.
saint-louis.com | dhmcnabb.com

« As a glassmaker I was honored and eager to work with crystal. The sharing of knowledge and expertise that happened during the residency is to me what glassmaking is all about. Much of the work made during my time there was in homage to the culture of Saint-Louis-lès-Bitche and Saint-Louis crystal. The Foundation, the time and support I found at the factory was instrumental in the materialization of the work. Crystal is what i would say is an endangered material – similar but different from glass – there are few places where it is still produced. As a maker I feel kind of separated from the work once it is complete so for me the ultimate experience was enjoying working with the craftsman/women and staff of Saint-Louis – the passing of knowledge through material translations – I don’t speak French so most of our communication was through the act of making – glass whether cold or hot has its own language. From the factory to the forest that surround Saint-Louis I was given a glimpse into a history of glassmaking and a chance to learn, share and make in that history… » DH McNabb – designer and glassmaker

The Cultural Services of the French Embassy in the United States launched Oui Design, a multifaceted program to foster creative exchange in design between France and the U.S. By partnering with individuals and institutions on both sides of the Atlantic, Oui Design supports and initiates creative collaborations with designers, artisans, curators, inventors, researchers, teachers, students, and manufacturers. It also brings French designers to the U.S. to exhibit their works, and engage with industry professionals and the public. In so doing, the program aims to enhance the economic and creative aspects of the design industry in both countries. Supported by Institut Français-Paris, the French Ministry of Culture and Communication, FACE Foundation, the Florence Gould Foundation, Van Cleef & Arpels, and Air France, Oui Design consist of exhibitions, talks, workshops, debates, residencies, and more in New York in 2016 and 2017. Additional projects and events will take place in Boston, Chicago, Detroit and Miami. The program offers U.S. audiences a context in which to discover and exchange with some of the most important designers and professionals in France today.